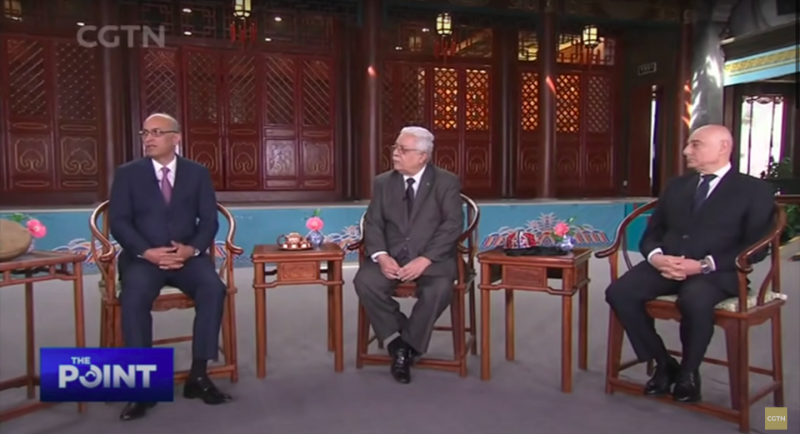 The ambassadors of Palestine, Pakistan, and Syria speak at the Chinese CGTN TV program ‘The Point’. Screenshot from CGTN YouTube channel.

China’s propaganda efforts to showcase prosperity rather than gruesome prisons and labour camps in Xinjiang reached a new high recently, as displayed in an interview with three foreign ambassadors aiming to dismiss claims of human rights violations in the region.

The Chinese Ministry of Foreign Affairs stated that, over recent years, more than 1,200 diplomats, journalists, and religious personnel from over 100 countries have visited Xinjiang.

“They saw the region with their eyes, realizing that what they witnessed was different from some Western media reports,” Hua Chunying, a spokesperson China’s Foreign Ministry, claimed.

In late April 2021, the government published a video interview with the ambassadors of Palestine, Pakistan, and Syria in English on a notorious public relations website. The aim was to spread propaganda to the Western world, and it became clear immediately after the interview started.

“We fully understand because we have the same problem,” the Syrian ambassador Imad Moustapha said during the interview, after a guided visit to the region.

Moustapha's reference was to the various adversaries of Syrian President Bashar al-Assad who has ruled the country with an iron fist since 2000. Between 2014 and 2019, the Syrian territory was under constant military threat by the Islamic State.

Pakistan's ambassador to China, Moin Ul Haque, described this trip as “an experience of a lifetime,” and praised the infrastructure of the region — including the concentration camps — as “people-centric development.”

No-one, including Uyghur activists, has denied the development of Xinjiang. Yet, progress has moved forward despite a human tragedy.

While China urgently needs the natural resources of Xinjiang, or East Turkistan as Uyghur activists prefer to call the region, to make the Chinese economic dream a reality, Pakistan has received Chinese investment to feed its population and build a strong military against its long-term enemy, India.

Shockingly for Uyghur observers, Fariz Mehdawi, the Palestinian ambassador to China, was also impressed by the “development” he witnessed in the Uyghur region. “One should not believe that diplomats are so naive that they could be maneuvered to take and buy anything,” Mehdawi argued, adding that “the diplomats are not part of a conspiracy that would justify something against what they had seen.”

In this statement, Mehdawi confessed that he accepts China’s narrative without reserves. The Palestinian and Chinese government, in fact, share a similar proxy adversary, the US government. The Chinese government has long argued that the US government's support for the Uyghur's cause is directed to undermining China becoming a global economic superpower. The Palestinian government peddled the Chinese stance on Xinjiang possibly in response to the US support for Israel in the long-lasting conflict in Palestine.

Mehdawi went as far as saying that he believes that the Uyghur problem is not a humanitarian issue but is rather a matter of geopolitics “created by the US,” which aims to hinder China’s global rise.

Whataboutism as the only argument

Using the logic of whataboutism, China and its supporters always refer to the genocides in America, Australia, and Africa carried out decades and centuries ago.

The struggle of the Uyghurs, however, is a real and current one. Satellite imagery proved that there are around 380 camps, detention centers, and jails where people are kept against their will and without a fair trial.

At the 47th session of the UN Human Rights Council, 65 countries supported China regarding the Uyghur situation, while 44 Western countries criticized China for human rights violations in the Uyghur region, with some accusing China of committing genocide on Uyghurs.

Ironically, most of the countries that support the Chinese policy in Xinjiang are, like the Uyghurs, Muslim.

Saudi Crown Prince Mohammed bin Salman supported China’s targeting of Uyghurs and Muslim people, stating that “China has the right to take anti-terrorism and de-extremism measures to safeguard national security,” when he spoke with Xi Jinping.

Local voices respond to the ambassadors

Patigul Ghulam, an Uyghur mother, who lost her son in the events of July 5, 2009 in Urumchi, described her plight during the search for her son in an interview with Radio Free Asia.

Syrian mothers are happier than me. They can cry when their child dies. Palestinian mothers are lucky. If they cry, thousands of reporters come to [film and interview] them. If we have thousands of our children abducted and killed, no journalists come to us. Palestinian and Syrian children can throw stones at their enemy, and in the worst case, they will die instantly from a bullet or a bomb, but they will not have their organs taken or be forced to work until they are dead and their bodies can be found.

Prominent Uyghur activist Rabiye Qadeer, a former head of the World Uyghur Congress, said in an interview that China is implementing a “slow-death genocide” through concentration camps, sterilization, and slave labor.

China needs time to achieve this aim. So, they have been constantly denying the existence of concentration camps and then claiming it as a vocational institution, lying by saying: ‘The trainees already graduated.’ This went on for five years.

In the interview, Qadeer asked the international community to “not to expect China’s approval of the investigation or hope to achieve any successful outcomes, instead, make decisions and enact based on the existing facts.”

In a recent article, Nury Turkel, a senior fellow at the Hudson Institute and a commissioner on the US Commission on International Religious Freedom, said that he believes truth and justice will eventually trump the policies of the Chinese Communist Party (CCP).

Just as the Chinese government officials who kept my mother captive could not prevent her from dreaming of freedom, the CCP’s campaign of lies will not prevail against the power of truth. 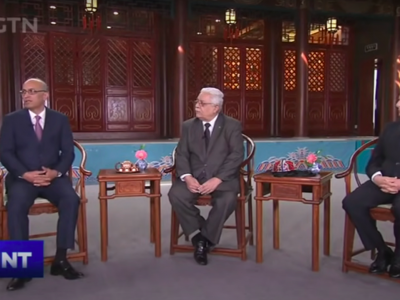